My daughter gave me the new Van Gogh biography for Christmas. Van Gogh, The Life is written by Steven Naifeh and Gregory White Smith. Hailed as “Magisterial” by the New York Times’ Michiko Kakutani, it is as heavy a bio as any I’ve read since McCullough’s Truman. And almost as long, at about 900 pages. I’m a slow reader so I’m only on page 533, as of this morning. Generously illustrated with both color plates and halftones peppered throughout, this is a nice quality book for a paperback (I don’t think there is a hardcover version). It’s published by Random House, ©2012. Being a Van Gogh fan, more for his florals and landscapes than his dreary bedrooms and chairs or his sporadic portraits, I’m gaining a rather different impression of the man. We’re all familiar with his challenges that led to a partial severing of his ear on to his tragic demise. But I always assumed his drawing and painting style were intentional, advancing a modern technique by choice. It may turn out the man simply struggled with drawing. And painting, and proportions, perspective and everything else fundamental to art. I sheepishly consider this may have been the case. I’m embarrassed, as I’ve spent so much time and energy apologizing for the moderns. Could it be true what my cynical friends have always argued: these folks just couldn’t draw?  I’ll have to see where Naifeh and White Smith arrive with their conclusions, but so far, it seems they are stating what everyone but me and my ilk have consider obvious. In fairness, Van Gogh’s collected works do show progress in all areas. The Langlois Bridge at Arles with Women Washing displays accurate perspective. The Zoave portrait of 1888 is handled nicely, both in drawing and color. I’d be surprised to find the authors dismissive of all his work. They have not been hard on Van Gogh. They distinguish between his successful and less noble attempts. I’ll have to speed up to see where they wind up. So far I’ve not abandoned Van Gogh, but I may reconsider whether I’ve been a victim of propaganda. In any case I’ve no doubt that whether by intent or insanity, Van Gogh worked feverishly and produced striking and iconic images. I’ll let you decide whether for better or worse. 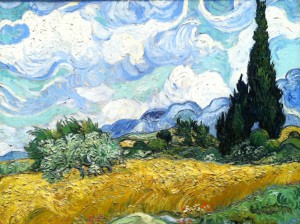