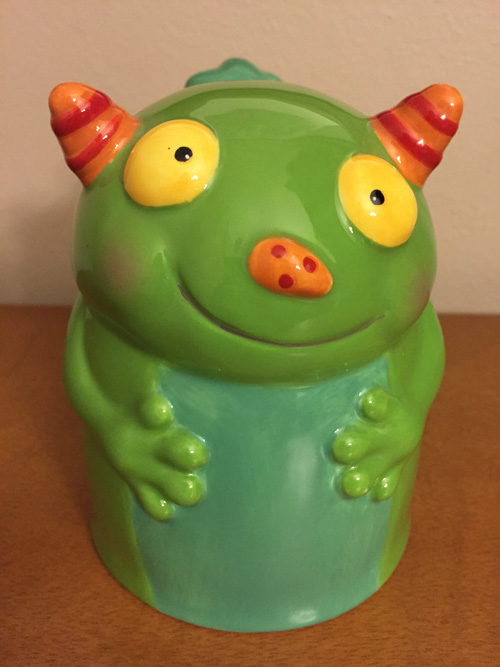 For Valentine’s Day Judy gave me this Topsy Turvy mug. I have a small collection of toys, trinkets, stuffed animals and a few gee-gaws in my studio. Emphasis on a few, I’m not a “collector” of stuff and being something of a minimalist, I believe less is more. But Judy knows my tastes and that I have a penchant for whacky creatures, so she gave me this wonderful mug.

This guy didn’t come with a name, so I’ll call him Spike, in reference to his little orange horns. He’ll likely wind up in my studio alongside my Wallace and Gromit figures, or near superhero costumer Edna Mode, whom my daughter gave me for Christmas some years ago.

I like having a few fun figures peppered around my work environment to keep my silly enough to make fun, kid-friendly art. I don’t get calls to do this exact type of work, but looking at guys like Spike will help feed the fires of whimsy.

In previous posts I’ve written about talking cartoon animals, goofy product characters, and  fabulous critters made into Chinese lanterns. We can’t help but create, and enjoy, humorous and human-ized creatures. There may be a million and one reasons why we do this.

I’ll throw out one for consideration.

We delight in life.

Not just the extension of life, though that’s obviously a high priority, but the wonder of life, the joy of life.

Life’s experiences aren’t always joyful and wonderful. Like Spike, we can be turned upside down. It’s funny when Spike is upended, it’s not funny when we are. Sadly we can even lose any sense of joy in life, but we certainly wish it wasn’t that way.

In a small way, maybe in a ridiculous way (goofy mug making), we humans press on scripting imaginary places filled with wonder. Story making brings about guys like Spike. He’s not just molded ceramic, he’s a character. He begs for a story: Who is Spike? Where is he from? What does he live for? What challenges face him? Is he good? Is he bad? Where is he going? What is his primary purpose?

If someone were to write a story for Spike, they would flesh out those questions and bring resolution. A good story reader would expect nothing less.

The belief that life is essentially meaningless is a belief that no one is satisfied with. I’ve read and listened to people who pretend they are satisfied with it, but then they passionately proceed to explain how it would be better if I converted to their belief in ultimate meaninglessness. The “better” is what betrays them. There is no “better” without meaning.

Spike’s story would have no place in a place like that. Just glancing at Spike up there you can tell he is hopeful, whimsical, and maybe naive. Doesn’t he look naive, even gullible? I’ll write him into a story where he wants to keep that smile by not losing hope. In that story Spike is set upon by beings I’ll call Un-lively Creatures.

The Un-lively Creatures try to do Spike in, but not by attacking him. They upend him by attacking his story. In fact, they attack all stories. They suck life from all stories by screaming that no stories are true. That’s a real problem for Spike, because he’s a Lively Creature and he knows there is no point to anything if no story is true.

But Spike presses on because Spike is in for the long haul. The Un-Lively Creatures are sadly satisfied with the short haul of a meaningless non-story that fizzles out to not even a bad ending, because only a meaningful story could have a bad ending. Spike, however, keeps that goofy, gullible, smile because he’s convinced there is a good ending in a good place where joy and wonder not only resolve the story, but stays happy ever after.

That would be something like I would write for Spike. I’d fill in a lot more details and action, but the main point would be the story itself, because stories are true.

I’ve said that before. I borrowed it from C. S. Lewis. What it means is that all the old stories are true. All the stories that involve a right beginning that went bad, a good place that got fouled, a safe couple that got lost, and a strong hero that got there just in time. The hero is the key. If you look at Spike’s arms, they aren’t going to help him when he’s upside down. They’re just too short. He needs someone to grab his tail, flip him over, and put him right.

We make these happy ending stories for a reason. They are’t survival tricks to keep us going. The Un-Lively Creature consensus is that we won’t keep going, but that we’ll die off completely, irretrievably, and all for absolutely no reason, ever.

Rather than buy into the belief that stories are tricks, consider that the stories reflect what is really true. That life does matter, that we are made for purpose, and that we make lively, whimsical, creatures because we are made in the image of a Creator who is God of the living, not the dead.