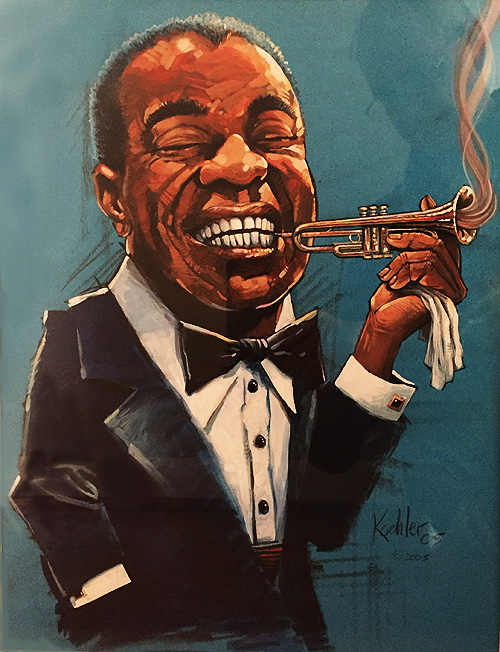 This was the heyday of The Ed Sullivan Show. I saw Jose Jimenez portray an inept astronaut, Senior Wences talk to a head in a box, watched Russian dancers leaping and saw The Beatles in all their appearances on Ed Sullivan.

And a lot of Louis Armstrong. Ed must have loved Louis, because he was a frequent guest. Since I was more interested in The Beatles than Louis Armstrong, I only knew him as an old guy with a handkerchief singing Hello Dolly. He held a trumpet, but didn’t seem to play it much, he just grinned, sang, and welcomed Dolly back to where she belonged.

The Ford International Weekly, The Dearborn Independent, splashed this headline:

As I write, I’m listening to the CD soundtrack from Ken Burns’ Jazz, The Story of America’s Music. I just heard Louis Armstrong’s Potato Head Blues. It’s a jumpy tune with a pronounced tuba and a lot more trumpet than I heard Louis play on Ed Sullivan. Armstrong recorded this in 1927, six years after the Dearborn Independent declared this genre “moron music”, and Jewish at that.

I don’t think Louis Armstrong was Jewish. I don’t think the pioneers of this music were Jewish, so my guess is that the publishers of The Ford International Weekly smelled conspiracy. I’m not sure what straight line the editors drew from Jewish to Jazz, but however straight that line, it ascended and jumped over the history of African descended Americans and their experience in this country and their invention of the only music that can be called American.

The lower right corner of the same front page draws attention to another article: Teaching the Deaf to Hear With Their Eyes. I’m guessing this was an article either about lip reading or sign language.

I wish there would have been an Op-Ed to the headlined Jazz piece entitled, Teaching the Blind to See With Their Ears. A crafty writer could have offered that listening to Jazz would not inflict idiocy, but open ears to see color, texture, contrast, and complexity come together in a dance of joy and freedom born of pain and suffering. 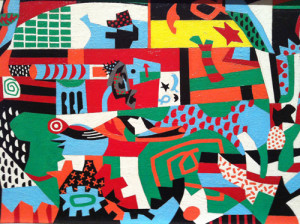 When I was an art student, my Design and Color Theory teacher assigned a project for which I was to research an artist of her choosing. She gave me American painter Stuart Davis (b. 1892, d. 1964). I had to write a paper about him, use his ideas and methods to produce a work in his style, and then give an oral presentation centered on my research and the painting I produced.

It was one of the most enjoyable and profitable assignments I had in any class, for any subject. I’m glad to say my enthusiasm for the project paid off and I received an A.

The image above is Stuart Davis’ Report From Rockport, 1940. While my painting was an acceptable attempt, and more than satisfied my teacher, it was still far from the quality of  Davis works. Yet I was only 18 or 19 years old, and Davis was 48 and had painted for many years. He progressed from Ashcan painter (with John Sloan, the premier artist of that genre) to his Jazz influenced abstract landscape and still life style. Davis was a Jazz lover.

I like to think that listening to Jazz helped Davis to see with his ears. Like Jazz, this painting may initially suggest random chaos. I didn’t really know Jazz until I was about 18 or 19 years old, about the same time I made my attempt to paint like Davis. When my pianist friend George  introduced me to serious Jazz, I was not sure what to make of it. It sounded like random chaos.

I kept listening and paying attention. I started to notice things that initially passed me by. I’m not articulate enough to put what I heard into words, but I heard more and more with each record.

What I learned from Davis, and Jazz, is that abstract art can have layers, textures, temperatures and rhythm. They can be improvisational, joyful, whimsical, and free. Jazz doesn’t appeal to everyone, and neither will Stuart Davis. It’s not my business to regulate taste. It is my personal business to find joy in unexpected and unpredictable places.

I go into this not only for the sake of art appreciation but human appreciation. When human endeavors are quickly dismissed  as “moronic” or ascribed to the evil designs of a tongue, tribe, or nation other than our own, I think we fall into something far uglier than abstraction.

Visit an art museum. Go online and find a Jazz station. Slow down and look, quiet down and listen. Draw conclusions, make your assessments, but do so after much consideration. Hear with your eyes and see with your ears. You might be pleasantly surprised.