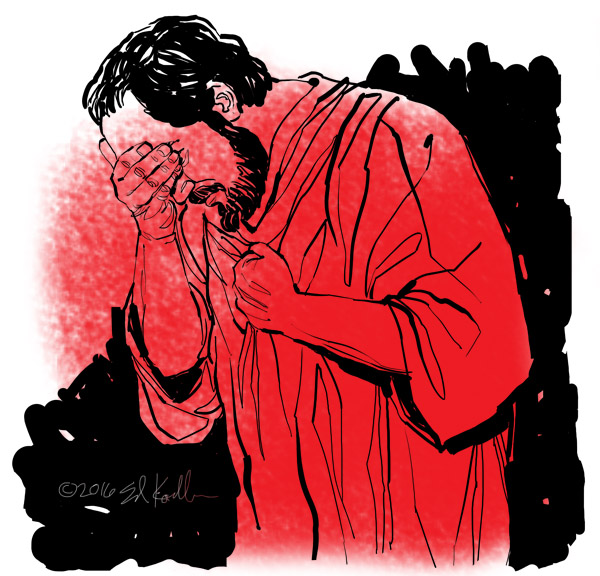 There were some present at that very time who told him (Jesus) about the Galileans whose blood Pilate had mingled with their sacrifices. And he answered them, “Do you think that these Galileans were worse sinners than all the other Galileans, because they suffered in this way? No, I tell you; but unless you repent, you will likewise perish.”

This excerpt from the Gospel of Luke is admittedly an odd beginning to a post about Art & Whimsy. It’s very hard to be whimsical when very bad things disrupt our peace and joy.

The easy answer to the question Jesus suggested (likely already considered by those reporting the bad news) would have been, “Yes”. End of story. Next question. The answer was not a simple, “Yes”. On the contrary, the answer was plainly, “No”. But it wasn’t only no; it was appended by the sobering “unless you repent, you will likewise perish”. More about that in a bit.

I want to remain faithful to Jesus’ way of fielding questions about horrible events. Following are a few observations from the text cited above.

To be disturbed by horrible events is not a new thing. We in the 21st century aren’t more sensitive, or more compassionate than people 2000 years ago. People then, as now, were highly unsettled by terrible news. The reason people reported this event to Jesus was because it was disturbing, terribly frightening, and immeasurably sad. Like us, they wanted a quick and satisfactory explanation. All the more comforting if that explanation could draw a moral distinction between those who suffered and those who didn’t. That would have wrapped things up nicely.

Jesus rarely wrapped things up nicely. He unsettled them even more by adding the “unless you repent” clause.

Jesus didn’t leave the crowd, and the reporters, with a simple admonition to “keep doing what you’re doing (don’t become as evil as those Galileans) and you’ll be fine”.  Nor did he commend them on their collective compassion and concern for the victims. They may not have been as concerned for the victims as they were for themselves. By asking the question for them (whether those Galileans were worse), Jesus cut to the core of their concern: could they, by favorable comparison with “worse sinners”, be kept safe from a similar catastrophe?

No. Because they didn’t compare favorably with those Galileans. They didn’t satisfy the law more than those Galileans. On the contrary, they (the curious crowd) were assured they would likewise perish if they didn’t repent. What is being said here requires further careful observation. At a glance, it may sound like Jesus is simply saying “stay caught up on your repentance and you’ll be safe”. Ironically any self-effort to stay sinless would put them right back into the position of gauging themselves against “worse sinners”. I’m not sure Jesus was setting them on that path, since they were already on it.

I think, more likely, Jesus was crushing their hopes that they would be kept safe only if they were notably better than other people.

It isn’t hard for us to find someone on a lower moral rung than ourselves. If we find that someone has met a sad fate because of their immorality, we take some comfort in resolving that sad story (they got  what they deserved, suffered the consequences, etc), and carrying on in confidence that we will achieve a ripe old age, so long as we don’t succumb to their (name your pet sinner) level of immorality.

The interesting thing in this text is that the victims of Pilate’s rage seemed to have had no high view of themselves. They were in the midst of offering sacrifices, which can only mean that they viewed themselves as sinners in need of the forgiveness procured by making sacrifice. Jesus, in refusing to cite them as worse sinners, offered no comforting explanation that they were hypocrites, hopeless sinners, or somehow fouling the ritual in which they were engaged. We don’t know why Pilate unleashed his fury on them, and Jesus, if he knew, didn’t tell us. Why it happened to them (those Galileans) wasn’t the point. The point was, the crowd he addressed (and we, the later audience) weren’t better. Unless we repent, we face judgement and destruction.

Repent of what? Thanks for asking. Certainly to repent of sin, but again, not in a way that puts us back onto the comparison road. I think it could be extracted that a large measure of the repentance we need is specifically in the way we judge others. As I said, we have no problem finding people worse than us. The evening news provides me with hundreds of examples of people worse than me. It’s easy to assure myself I’m okay because I’ve not murdered, robbed, rioted, driven drunk, cheated on my wife, or spray painted hate speech on an apartment building.

Until I get to another one of Jesus’ pithy sermons; the one he gave on a hillside with the opening phrase “blessed are the poor in spirit”.

To be poor in spirit is to be aware of a personal need of repentance. To be mindful of measuring up poorly against God’s good laws. To be aware of logs in our own eyes before picking out specks in others. To be poor in spirit is to realize that we don’t have what it takes to pass the cup of God’s wrath on to the next person without taking a sip ourselves. To be poor is to be in need of something we don’t have. That something that you and I don’t have is the satisfaction that God is favoring us because we are better than them, those late night dancers at that bar.

Please don’t let me be misunderstood. I believe all the Bible, and all its judgments, are true. What I need to continually remind myself is that all its judgments include my willful sin, and I am not allowed to try and deflect God’s gaze upon those Galileans in hopes of escaping notice. If I’m not poor in spirit, I’m “rich” in self-righteousness, and that bank account is pitifully short of what I owe.

And now the whimsy.

God demonstrates his own love toward us, in that while we were yet sinners, Christ died for us. Much more then, having been justified by his blood, we shall be saved from the wrath of God through him (Jesus). This is grace, undeserved, unearned, unattainable by the rich in spirit. They don’t want it because it doesn’t buy them the satisfaction of being better than others. The poor in spirit are thrilled by it because they know they are completely on the dole when it comes to mercy. They know they are welfare babies and that their daddy is a hands-on daddy who delights in adopting bastards and making them heirs.

That is wild whimsy.

Pray for the friends and families of the 50 who were slaughtered at the hands of self-righteous hate and for the scores wounded physically and emotionally. I pray Jesus would come quickly and make everything right.