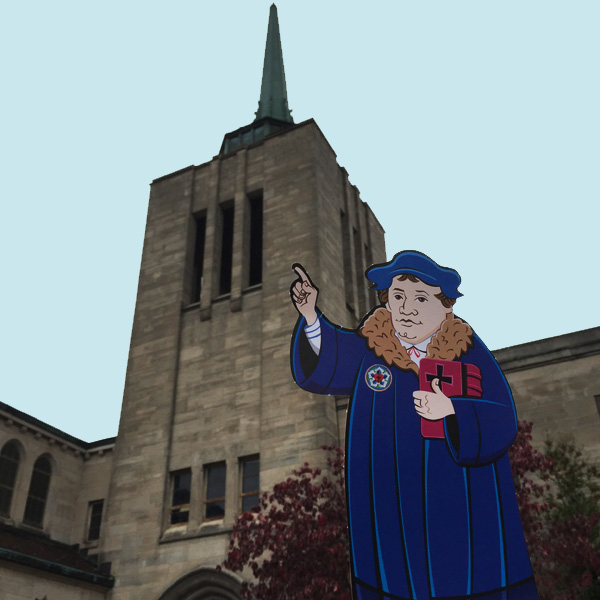 October 31 is the 499th anniversary of the start of the Protestant Reformation. To be fair, to say Happy Anniversary is one-sided, as that turning point in history isn’t welcomed or celebrated by all. Yet through the past almost 500 years, more Christians of all persuasions have conceded the Reformation’s place in history, and its inevitability, given the state of the Renaissance church.

Without going long on the particulars, the Reformation was kickstarted by Augustinian monk Martin Luther who posted 95 theses intended to engage debate and dialogue regarding indulgences (means by which souls could be released from Purgatory), and other Roman practices. These theses were mass produced by way of the new technology of the printing press.

Of course history isn’t moved by any one person or event. If you are unfamiliar with the big picture, I recommend Lewis W. Spitz’s two volume work The Renaissance and Reformation Movements, Revised Edition 1987, Concordia Publishing House.

So What’s With The Funny Looking Luther?

Creative Communications for the Parish publishes Christian teaching materials. They called upon me to do a kid-friendly Martin Luther for next year’s 500th anniversary of the Reformation. This die-cut project is a traveling Luther intended for photo ops far and wide. The craft includes a brief explanation of the 95 theses.

My Luther has been popping up on Facebook around the country.

Judy and I took him to Kirkwood, MO on Sunday afternoon. The photo above was taken at Concordia Lutheran Church in Kirkwood. He joined us at Kaldi’s Coffee, the Kirkwood Farmer’s Market, and other places around town. Here he is with Judy and a cup of coffee. 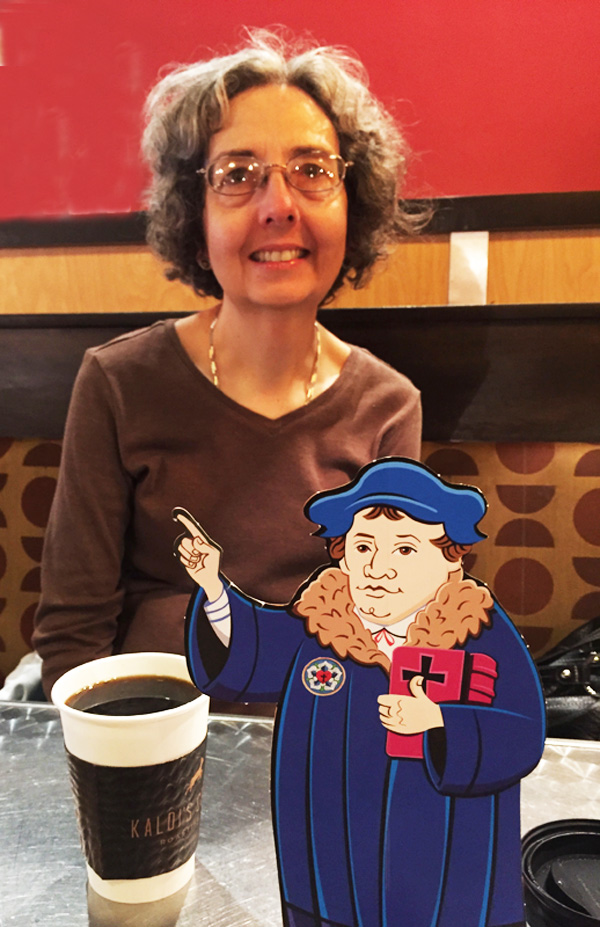 Reformed Christianity is known for its refusal to parse between spiritual and secular activity, since this tradition emphasizes God’s sovereignty over all creation. Stewarding creation well is an important feature in Protestant thinking (however that might be considered well-done) and so here is Luther reminding us to recycle our paper products. Thank you Dr. Martin. 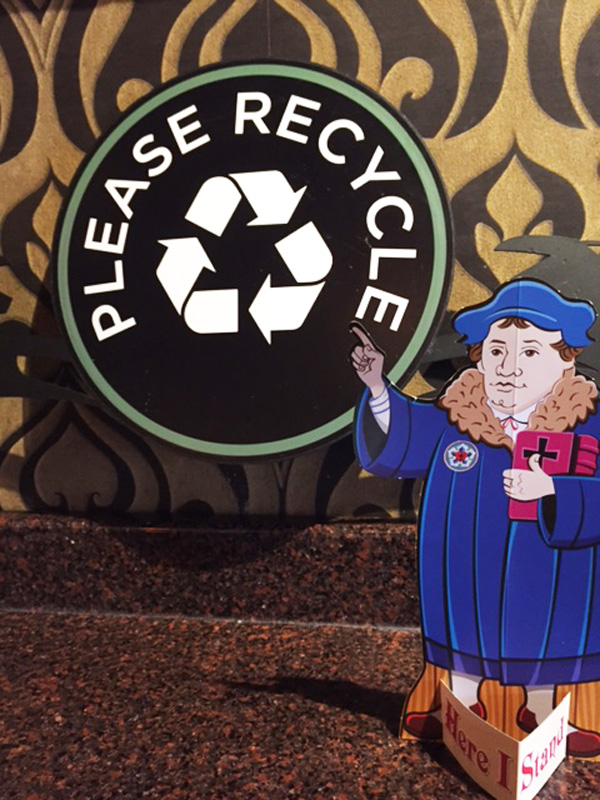 Luther also affirmed all vocations as glorifying to God (assuming they are lawful and not immoral). A milkmaid’s calling was as noble as a minister’s, and in the economy of Christ’s Kingdom “secular” callings were not inferior to religious vocations. Does that include this scarecrow? Okay, maybe the noble worker has to be a living human, but I thought the guy looked pretty cute and worthy of a photo op with Luther. Now if he only had a brain. 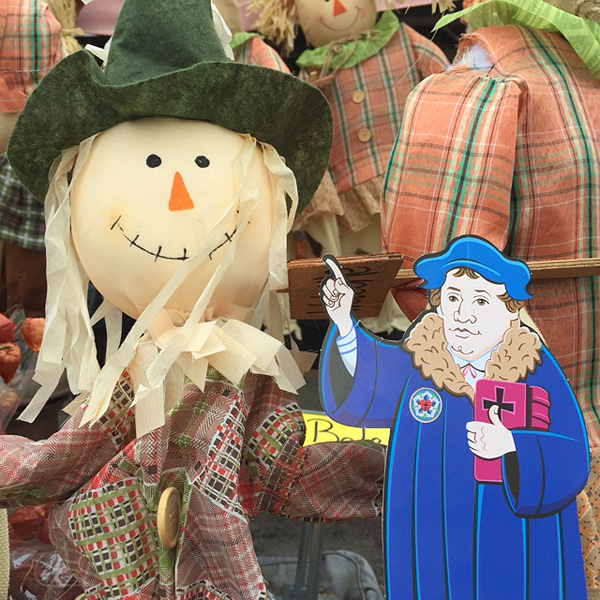 All this silliness aside, the Reformation was serious business. The point of the traveling Luther isn’t to treat him or the movement lightly, but to make learning about him fun and engaging. I’ve made a case for my kind of art in earlier posts, and suffice to say I think (and always hope to be corrected if I’m wrong) that making fun art for kids is a good way to draw them into the story.

What’s It All About, Marty?

History was my back-up plan if art didn’t work out. I studied Renaissance and Reformation history in evening classes at Washington University. I’m by no means an expert or historian, but I am deeply invested in learning history well, and understanding the times and issues being studied.

How things get to where they are at a given period is complicated stuff. Martin Luther didn’t just pop up with a sick agenda to divide Western Christendom. History is complicated and the individuals living through it are complicated. Luther wasn’t a pristine prophet, or a deranged schismatic. He was, for better or worse, a deeply introspective cleric who could not rest without knowing whether God was pleased with him.

Luther had a lot in common with us. A common thread in the human psyche is guilt and shame. Materialists, (with no empirical evidence, in my opinion) may chalk this up to either evolutionary advantage, some suggesting these “bad feelings” keep us living well within the tribe. Other materialists simply see guilt and shame as straw men built on superstition.

I’m not implying that is what every materialist thinks, but my conversations with some have suggested such.

In any case, guilt and shame aren’t so easily dismissed. I have plenty of atheist and agnostic acquaintances who suffer guilt and shame as much as I do. I simply believe I have a good reason to be guilty and ashamed.

So did Luther. When all was said and done, Luther struggled to know whether he could be loved by a holy and righteous God. The evidence was piled against him, and he dreaded judgment. Luther acknowledged that his excessive piety didn’t reflect love for God, but hatred. He didn’t perform all his strict religious duties out of love and devotion but out of fear and dread. He was trying to placate a stern judge whom he assumed meant no good for him.

Studying the Bible, when he was made a professor of theology at Wittenberg, Luther found Good News. He found that the just shall live by faith, not by obsessive self abuse. He found that God’s anger toward sin was satisfied by Jesus Christ, the one who “knew no sin, but became sin on our behalf”. He found that while he (Luther) was a sinner, Christ died for him.

Luther’s life was transformed by Paul’s epistle to the Romans. You may be very familiar with that letter. You might have been familiar with it once and forgot. You might be partially familiar, or have vague memories from a sermon or booklet.

As today is All Hollow’s Eve, and the anniversary of the Reformation, I invite you to read the Epistle to the Romans. It’s the sixth book in the New Testament. Like Luther, when I first read this letter to 1st century Roman Christians, it opened the Gospel of Jesus Christ to me like I had not seen before.

Maybe you’ll travel with Luther and gain a whole different perspective on how you think about God and his love for you.