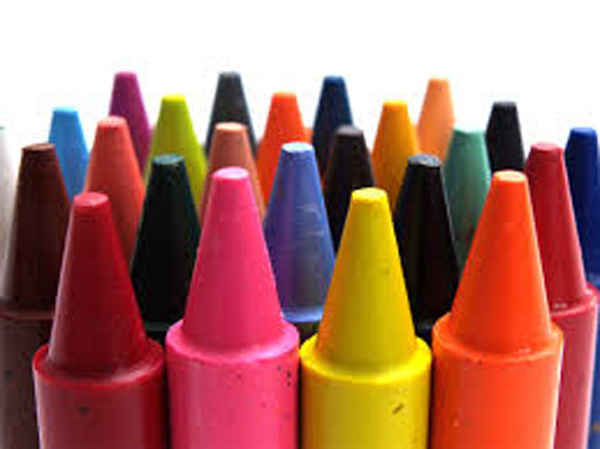 From five years old onward, a fair number of my Christmas or birthday gifts were art related. My talent was identified early, and encouraged with a variety of creative aids. On that fifth Christmas I received a deluxe John Gnagy art kit. John Gnagy was the original television art instructor. An encouraging uncle sent this kit to me from Phoenix, AZ, via the North Pole, to Virginia Avenue in South St. Louis.

An amazing gift for a five year old, it contained newsprint, charcoal paper, grayscale chalks, pencils, kneaded eraser and stomps (neither of which I had a clue about), and a booklet that stepped the novice through fundamental shapes, perspective drawing, and proper shading. I was on my way.

When I Got Sixty Four.

As I was only five, I recall the deluxe set was a bit advanced for my skills, and I wasn’t yet that interested in drawing covered bridges (a John Gnagy specialty). The grayscale set of chalks, which I would later learn were commonly called TV chalks (look it up), didn’t excite the eye, and I mostly ignored them.

Fine as this great art set was, I really preferred a simple five cent Big Chief drawing pad and a set of 8 crayons. 16, when finances allowed, and if we were really flush, I might have gotten the set of 24. That was usually a birthday score.

Then one magical Christmas, when I was probably seven, I received the Binney and Smith mother lode. The box of 64 Crayola Crayons!

After our Christmas at home in South St. Louis, we would head to North St. Louis to spend the bulk of the day with our grandparents. This is all one city, mind you. We lived on the south side, Grandma and Grandpa lived on the north side.

We kind of had the impression, at least I did, that our grandparents had a separate North St. Louis Santa. I might have thought they even had the real one, since they had a fireplace and we only had a furnace and a flue. That meant our Santa had to come in the front door just like Ferd the butcher who delivered our groceries. Not very magical, but it got the job done.

Since Grandma and Grandpa had a fireplace, they were one-up on the Santa story. They also had a white artificial table top tree which I construed was fancier and costlier than our floor to ceiling real balsam. Grandma would inch the three wise men closer to the manger throughout Advent up to Epiphany.

That background sets the stage for the Christmas that I received my first box of 64 crayons. The North St. Louis Santa, properly arriving down a chimney, gazing approvingly at the opulent white synthetic tree, carefully set at my spot near the blonde formica coffee table these 64 shimmering sticks of pigmented wax.

The box itself was a packaging masterpiece, sectioned off into four cardboard compartments that carefully kept the colors in original order. And a crayon sharpener on back!

What more can I say?

John Gnagy’s gray chalk move over, this kaleidoscope of color filled my eyes and thrilled my heart. Even the names brought joy. The color names of crayons produced by Binney and Smith of Pittsburgh, PA seemed to build in crescendo. The eight pack was simple: red, orange, yellow, blue, violet, green, black, white. No seductive branding, just the facts. The sixteen set got a bit more expressive, with red-orange, blue-green, et. al. 24, a bit more so; as with the box of 48.

The box of 64 compelled the marketing department to pull out all the stops on their top of the line console of color. Cadet Blue, Maize, Salmon, Pine Green, Cornflower, Bittersweet. These are color names that excite the imagination and cause one to choose carefully and exotically all at once. No longer would a sky be rendered with a light handling of basic blue. Now, with the properly pre-mixed Sky Blue, one could experiment with a top shade of Aquamarine, and maybe a dash of Sea Green.

I fell in love with color.

What Does It Matter? 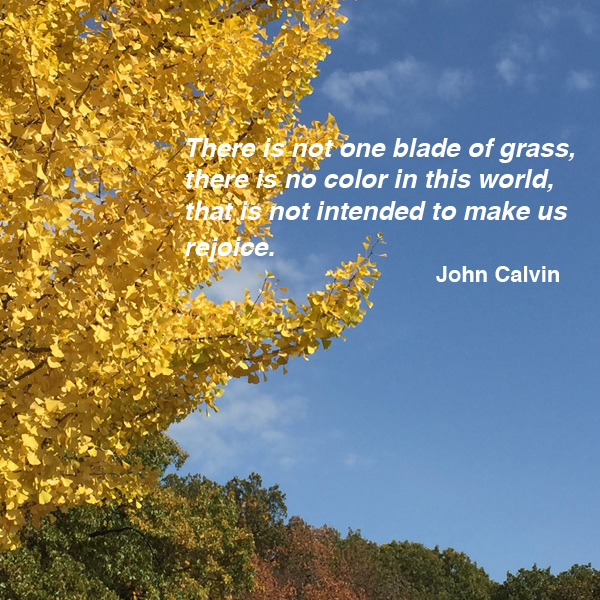 John Calvin was a sixteenth century French reformer; a leader in the Protestant Reformation. He is sometimes referred to as a Christian humanist. Humanist in that usage is nothing like Secular Humanist. Secular humanism is generally materialism, meaning that all you see is all there is. A Christian humanist like Calvin believed that what you see means something. They believe life has meaning, and that the world we live in has purpose. Everybody actually believes this, or else they wouldn’t get so high-strung about their ideas of right and wrong. But that’s another day’s subject.

Right now I’m simply rejoicing that there is color, and that color means something good. Calvin said it is intended to make us rejoice.

Rejoicing is one of those odd things that all sane humans do. I say odd because it is uniquely human, and it is uniquely gratifying. Since color makes me rejoice, it must do that for some lofty reason. When humans rejoice they are actually worshipping. There isn’t always a consensus as to who or what is being worshipped, but humans are in fact worshipping when they rejoice, gaze, stand amazed, and thrill.

Calvin pondered the value of beauty, pleasant scents, colors, and delicious tastes. He delighted that sensory pleasure fills our souls. For Calvin, this kind of humanism should lead to worshipping the one who created and did everything so well. It is all good.

I seriously believe it is not chance, or accident, or mere function of evolution, that a seven year old boy would open a box of 64 crayons and fill with joy over their beauty and thrill with excitement over their possibilities. I surely know it is no accident that the same boy would be so enthralled that he would try as best he could to make it his life’s work.

I hope with all my heart that this particular seven year old boy grew up to glorify the One who made it so.