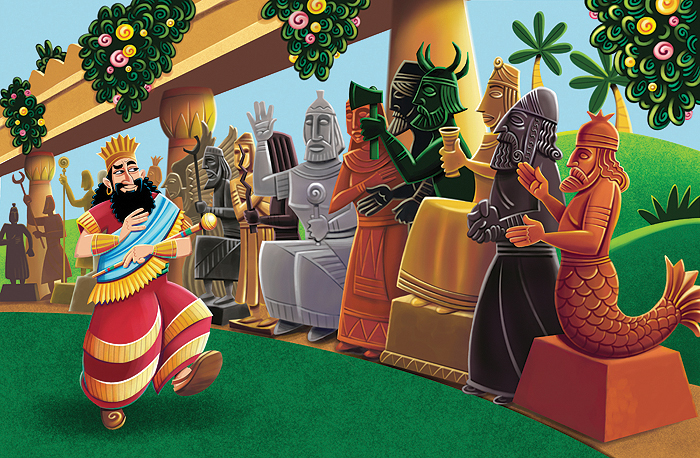 In past posts I’ve gone the extra mile defending art that many find inaccessible, strange and confusing. Check out some of my earlier thoughts on abstract art and jazz music. They may not convince, but they will support that I’m not artistically rigid.

There are times when art is actually bad. Not necessarily bad in its imaginative or technical excellence, but bad in its intent. Art intended to be worshipped is one example of bad art.

The illustration above is a two page spread I did for a Concordia Arch Book entitled The Mystery of the Moving Hand. It’s about Daniel interpreting the “handwriting on the wall” (Daniel 5). King Belshazzar gave a great feast where he and his fellow revillers saw a mysterious hand writing on a wall.

Since this was a children’s book, I gave the art a bit of whimsy. The publishers asked that the first two pages show Belshazzar strutting pridefully through his outdoor collection of idols. I researched some of the idols of Babylon for authenticity. That fish-man statue, for example, was a deity named Dagon, who was worshipped in Babylon, Nineveh, and Assyria.

This type of art worship is condemned throughout the Bible:

And God spoke all these words, saying, “I am the LORD your God, who brought you out of the land of Egypt, out of the house of slavery. You shall have no other gods before me. You shall not make for yourselves a carved image, or any likeness of anything that is in heaven above, or that is in the earth beneath, or that is in the water under the earth. You shall not bow down to them or serve them, for I the LORD your God am a jealous God, visiting the iniquity of the fathers on the children to the third and the fourth generation of those who hate me, but showing steadfast love to thousands of those who love me and keep my commandments.” (Exodus 20:2-6)

Creating something, and then bowing to it as though it is a creator, is just plain nonsense. That’s why the publishers and I felt the freedom to make this scene a bit silly. We didn’t intend to minimize the serious nature of idolatry, but to maximize the foolishness of it.

The prophet Isaiah highlights this foolishness in several places:

An idol! A craftsman casts it, and a goldsmith overlays it with gold and casts for it silver chains. He who is too impoverished for an offering chooses wood that will not rot; he seeks out a skillful craftsman to set up an idol that will not move. (Isaiah 40:19-20)

Those who lavish gold from the purse, and weigh out silver in the scales, hire a goldsmith, and he makes it into a god; then they fall down and worship! They lift their shoulders, they carry it, they set it in its place, and it stands there; it cannot move from its place. If one cries to it, it does not answer or save him from his trouble. (Isaiah 46:6-7)

In other places Isaiah mocks the foolishness of taking a piece of wood, burning part of it to cook food, burning another part to provide heat, taking the remainder to shape an idol, propping it up with another piece of wood to keep it from falling over, and then bowing to it as though it can meet one’s needs.

Whether these idols were very well done, or crudely executed, they were, and are, bad art.

Those are strong words, based on a strong commandment. There is no ambiguity in the “thou shalt not” prohibition of crafting objects of art as objects of worship.

It has to be acknowledged that some believe this prohibition extends to all art. Some people of faith do not make any artistic representations of people, animals, fish, or “anything”. I, and others more scholarly than myself, think the prohibition is clearly connected to making art for objects of worship. We believe this not because we want (I hope) to weasel out of obedience, but because the Bible itself promotes artistry, craft, and culture making. Genesis chapter 4 depicts the advance of culture building soon after Cain was condemned for murdering his brother Abel.

Though guilty of a great sin, Cain was banished, but protected, and a benefit of his survival was that a city was founded and culture advanced. Without getting into whether this was a local history, or intended to depict a spike in global civilization, it is clear from the text that making stuff with our hands is not anathema.

Exodus 36 tells about two men, Bezalel and Oholiab, and other craftsmen, “whom the LORD has put skill and intelligence to know how to do any work in the construction of the sanctuary . . . in accordance with all that the LORD commanded.” (Exodus 36:1)

Prior to this, Moses cited Bezalel as one who was filled with the Spirit of God, with skill, with intelligence, with knowledge, and with all craftsmanship, to devise artistic designs, to work in gold and silver and bronze, in cutting stones for setting, and in carving wood, for work in every skilled craft.

He was also inspired to teach with Oholiab. They were filled with skill to “do every sort of work done by an engraver or by a designer or by an embroiderer in blue and purple an scarlet yarns and fine twined linen, or by a weaver-by any sort of workman or skilled designer.” (Exodus 35:30-35)

The stained glass section above is from Memorial Presbyterian Church in St. Louis, MO. This is where Judy and I were married, where our daughters were baptized, and where we developed life-long friends. I won’t claim the windows were as directly inspired as the works of Bezalel and Oholiab, but they are clearly the products of skilled creatives.

Art can be used to educate, inspire, intrigue, and nurture longings for things to be made right. If art becomes an end to itself, with the pretense that it will make things right, then it becomes an idol.

This is where idolatry goes wrong. The creature is worshipped rather than the creator. God shares His glory with no one and no thing. Because God is God, I assume He does not need to explain His every command to me, but the prohibition against idol making makes immediate sense. Anything that needs propped up by us is not going to stand up for us. Art isn’t meant to save. Everything works best when it is working according to its intended purpose. Art is wonderful when it is suggesting wonder. Art is meaningful when it’s suggesting meaning. Art is powerful when it is suggesting power.

The Mystery of the Moving Hand, page 2 and 3 illustration ©2013 Concordia Publishing House