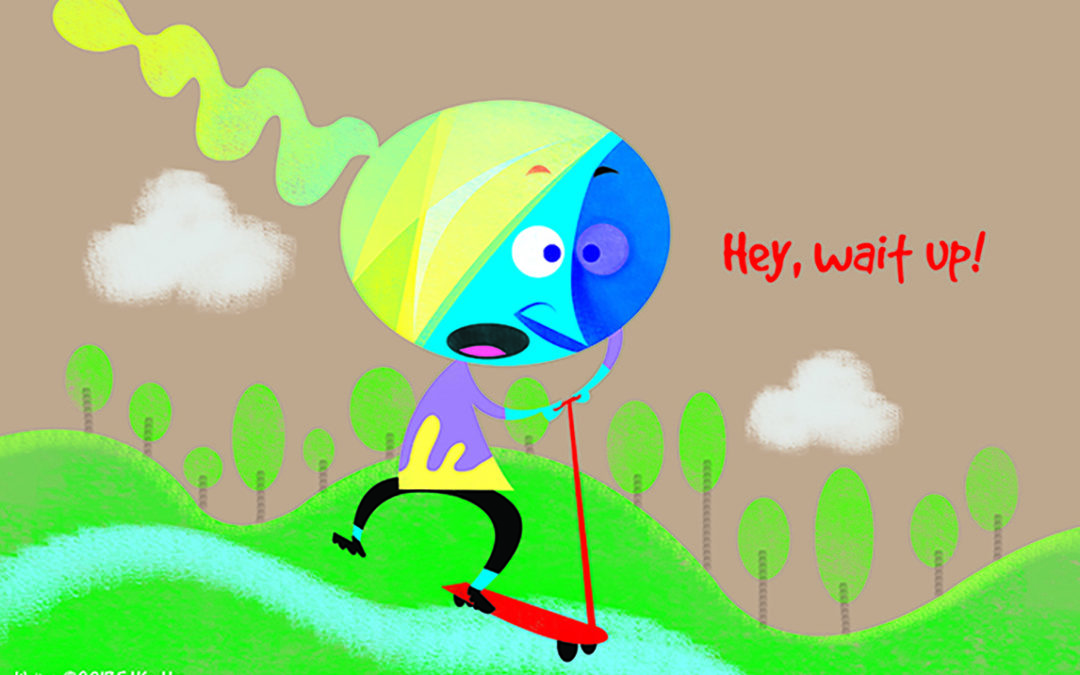 We all remember favorite toys from our childhood. Several come to mind: a silver and red airplane with a sliding canopy and fold up wings, an Etch-A-Sketch, a wonderful hook and ladder fire engine, and Colorforms®.

Colorforms were brightly colored vinyl shapes that budding artists applied to a slick black board. Colorforms evolved to real images applied to scenic backgrounds, but my early Colorforms were the basic shapes: square, circle, triangle, rectangle. half circle. Creativity was nurtured by figuring out how to make an image or pattern with these minimal forms. I much prefered the basic shapes over the later pre-drawn images.

Sitting in a coffee shop a while back, I took time to play on my Wacom tablet. I was in a Colorform mood that afternoon and started with a blue oval. No background, no preliminary idea or sketch, just a blue oval. If I recall, the smaller black oval came next, and found itself situated inside the bottom of the larger blue oval. Hmmm, an inverted blue olive with a black pimento? Nah. An open mouth? Yea.

And from there it went. Two eyes, a sharp nose. Should I have swapped the colors for something more human? No. Blue was right. It did need some hair, however. A ponytail. Now it’s a girl. A rather intense girl, being blue and all, with a fly-away ponytail.

What’s causing that hair to unfurl out of that blue oval head? The wind whipping past as she descends the hills in Carondelet Park, trying to catch up with her friends.

Carondelet Park? Yes. That was “my” park, in the South St. Louis area of the city. It’s a beautiful park, with two lakes, a wonderful boat house, several “shelters” for gatherings like ice cream or watermelon socials, live music, and small reunions, and a Bear Pit (sans bears). Of course it isn’t “my” park. It belongs to everyone. It was my favorite bike destination. Plenty of dells to descend and ascend on my fat tired bike (which I imagined to be a Harley Sportster).

Just as I could imagine Color Forms into skyscrapers, and an old red bicycle into a gleaming hot Harley-Davidson, I can imagine a blue oval into a determined kid winding her razor scooter into the wind.

Shapes and colors form our thinking about what we see and what we would like to see. What we see isn’t an illusion; it’s real. The joy comes out of seeing beyond what we see and imagining what might be, or to be bolder still, what will be.

For those of us who believe in things we can’t yet see, this is exciting.