C’mon Rusty, You Can Do It! 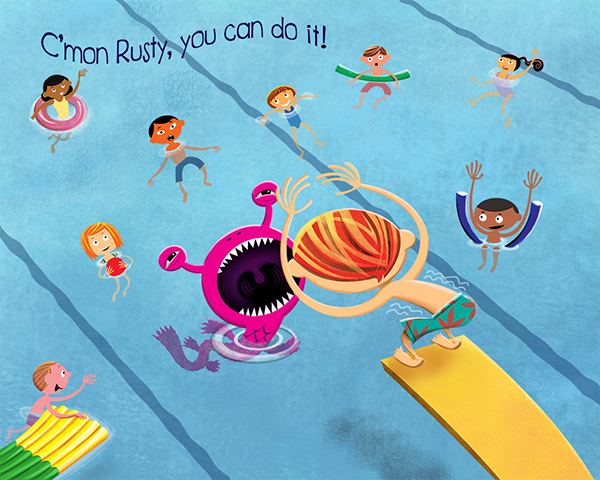 Marquette Pool, a public facility in our city, was pretty much an everyday destination when I was a kid. It was quite a few miles from my home, but that didn’t stop us from rolling up our trunks in a towel and walking the distance to get some relief from the sweltering St. Louis sun.

Relief came in the way of 45 minute swim shifts. The popularity of this large pool was such that groups had to take turns. The waiters stood in a fenced in, black asphalted holding area while the waders enjoyed their 45 minutes of fun in the sun. Once the whistle blew, the first shift would file out, while the second dove in.

The pool is L shaped. The larger rectangle of water was a reasonable 3 to 6 feet depth, whereas the narrower section that formed the L bottomed out at 10 or 12 feet. This is where the high dive lived.

The diving boards, one near the surface and the other, an apparent several hundred feet above ground, were for those who possessed skills of an extraordinary nature. Those skills belonged to the teenagers.

When you are nine or ten years old, a teenager is an amazing creature in whose presence you bow and scrape. My nine year old self, along with my eight year old sister, who was wearing a twelve year old rubber swimming cap (required) would gaze in awe as teenagers ascended the high dive to gloriously swoop into the watery abyss. These were our future astronauts, Green Berets, Hall of Famers, and Miss Universes.

As all eight and nine year olds do, we aspired to be like them. Our teenage years were still decades away, so far as we could count, but sometimes we would screw up the courage to follow in their steps. Their steps led up the hundreds, maybe thousands, of rungs on the high dive ladder. Only the strongest of nine year old hearts could take this challenge.

Is Rusty up to it? He made it this far, but now the hour of decision is upon him. He can, as many before him have, shimmy backwards onto the ladder and descend in shame. If he does, his only hope is that all his friends will develop inexplicable amnesia and have absolutely no recall of his cowardly retreat.

He’s quivering on the brink. His friends cheer him, his fears grip him, his legs tremble.
He closes his eyes and . . .

C’mon Rusty, you can do it!