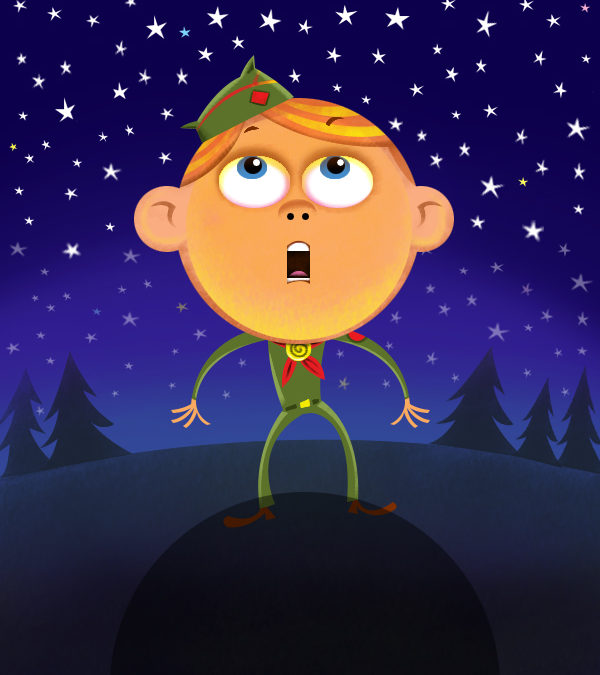 I was born in August. Being born during summer vacation meant that I never had to go to school on my birthday. The only draw back was that it also meant I was one of the youngest kids in my class. When I started Kindergarten, you only had to be five years old anytime before school began, which was the day after Labor Day.

Being one of the younger and smaller, not so much in height, but overall musculature, I was one of the last chosen for pick-up sports teams. A team captain picked out the biggest and the best, which wasn’t me, simply because I was so young for my grade.

I had other strengths for which I was admired. I became pretty good at a more exotic sport; archery. I also excelled at art. Nobody wanted me as a shortstop, but I was regularly called upon to draw for some special occasion. I think maybe my strong eye to hand coordination contributed to being a pretty good archer.

Archery fit well with my other grade school identity as a Boy Scout. Being a scout made up for athletic deficiency. Ordinary field sports were acceptable in Boy Scouts, but there seemed to be a preference for outdoor activities which developed skills that could actually keep you alive. If you were trapped in a thousand foot deep gorge, or a dense wood the size of Montana, you would want to be with the kid who knows how to tie a dozen knots, wield an ax, shoot a bow and arrow, and cook kebobs, more than someone who could kick a ball into a net. Just saying.

I started scouting right after I turned eight. Cub Scouts offered a range of things that naturally interested me. They had uniforms. I liked uniforms.

Cub Scouts took you from age eight to eleven. During that time I  learned great skills, like tying a square knot, painting neckerchief slides (the gizmo that held the kerchief around my neck), and how to make an Indian drum out of a coffee can and two rubber discs cut from old automobile inner tubes.

At age eleven I transitioned through WEBLOS into Boy Scouts. By this time my older brother worked at a big downtown  department store that housed the Official Boy Scout outfitters. With his employee discount my parents were able to buy me a brand new green uniform. I became a proud member of St. Louis Area Council Troop 295, Eagle Patrol. We were sponsored by St. John the Baptist Church.

There were generally two things to shoot for as a Boy Scout: Eagle Scout, and The Order of the Arrow. Our troop was thin on Eagle Scouts. In fact, I don’t think we had one. We had a couple of Star Scouts and maybe a Life Scout, but most of us were Second or First Class.

If you made First Class, you were eligible to be in The Order of the Arrow. Since I had only four merit badges (Eagle requires 21), I figured making Eagle wouldn’t happen until I was about 50 years old.

Order of the Arrow was, however, within reach.

The Order of the Arrow is a society of elite scouts. Its distinguishing feature is a white sash emblazoned with a red arrow. It drapes diagonally across the proud chest of the chosen. You can’t directly earn this, you have to be selected by fellow scouts.

Having observed your overall scouting qualities, your peers happily put your name in for the honor. Or, if you were like me, you sort of campaigned for the thing. That’s not exactly the way it’s supposed to be done, but it was, at least in my troop, a bit of a popularity contest.

That confession duly made, it was still exciting and an honor to be chosen. The ritual of being chosen was downright thrilling.

The final night of Long Term, the annual summer camp, was capped by the Tapping Out ceremony. Troops from all the Area Council gathered in full uniform around a huge lake, which was aglow with a mighty bonfire. Standing at attention in a large ring of hundreds of scouts, an older scout, seemingly eight feet tall, dressed in Native American regalia, ran inside the ring of scouts. If you were among the chosen, he stopped in front of you, glared, and literally pushed you in the chest, knocking you backwards over someone knelt on all fours. You were safely caught in this backward fall and immediately blindfolded.

I was tapped. All those years of being dismissed on the playground were being made up.

I was blindfolded and led off into the woods to sleep alone, sans tent, with only my sleeping bag. The woods were dense and the sense of danger exhilerating. There could be lions, bears, snakes, giant hawks, yeti; any variety of forest dwelling creatures bent on proving me unworthy of the white sash.

I survived the night, having avoided being dragged into a cave to live out the rest of my days in a bear clan.  Next I had to muster my skills to find my way back to camp. This involved noting moss on trees, charting the course of the sun, orienting my compass and map, and most importantly, following those who looked like they knew what they were doing.

The truth is, I was always within 20 or 30 feet of fellow tappees who were in my same neck of the woods. We soon found our way back to our respective camps. Our next ordeal would be The Ordeal, as it was officially called. That came a month later. It involved a weekend of silence and painting some old latrines. The Ordeal weekend ended with a fantastic meal, shiny latrines, and group singing of Boy Scout camp favorites, capped by the reception of the Order of the Arrow sash.

I still have it.