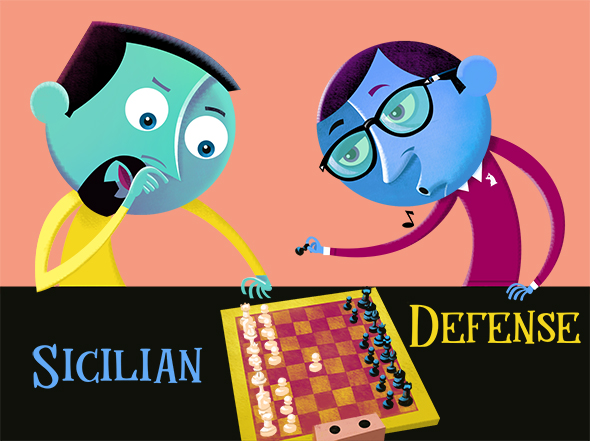 As I continue to play with these simple circles, I’m kind of surprised by what I come up with. All these simply start with a circle. No preliminary sketches, and truth be told, no actual idea.  First I drew two circles. I picked the green and blue from my custom color library (the one I call Urban Garden) and started coloring.

I like this sort of Picasso-esque thing with the noses halving the head. If you squint, you’ll see that they form a profile within a three quarter view of the head. Mentally erase the shaded part of the circle and you’ll see remaining a satisfactory profile in a cartoonish style.  From there it was only a matter of deciding what these two round heads are doing. My first thought was to have them watching a flea circus. Seriously. But fleas are pretty small. How about playing a board game? Monopoly and Scrabble came to mind, but then I thought of chess. Drawing the pieces would be fun, and these two cool headed gents looked like chessmen.

I know the moves in chess, but not the strategy. I thought it best to illustrate something realistic about the game. A quick search came up with The Sicilian Defense.  I didn’t search far enough to find why it is so called, but it sounded exotic and like something Chess afficionados would know well. I considered chess players might be serious about details, and I didn’t want to offend any of my chess savvy readers with a lack of authenticity. I play guitar, and whenever I see a guitar drawn with the frets all off, I’m a tad put off. I think any attempt to illustrate a serious avocation should treat the subject with upmost respect, even when treating it with humor.

To me the odd palette with the off-color faces somehow captures a cool level of concentration, even while the blue man whistles with confidence as he counters the white pawn opening at E4 with black pawn to C5. That, I learned, is the start of the Sicilian Defense. And that is about all I know. Years ago, when I had my first artist job at the McDonnell Planetarium, I became friends with Harry, a chess player of some skill. The Planetarium employed a number of folks with considerable minds and a fine grasp of logic. They also hired people who painted human faces blue and green. Fascinated by Harry’s grasp of the game, I went and bought a chess set and a book on strategy. As mentioned, I learned the moves, but the chess set eventually wound up in a garage sale. The moral of this story is that if you find someone who colors round-headed people in blues and greens, don’t put them in charge of military strategy. But by all means put them in charge of whimsy, because somebody has to keep the laughs coming.
Sicilian Defense ©2017 Ed Koehler