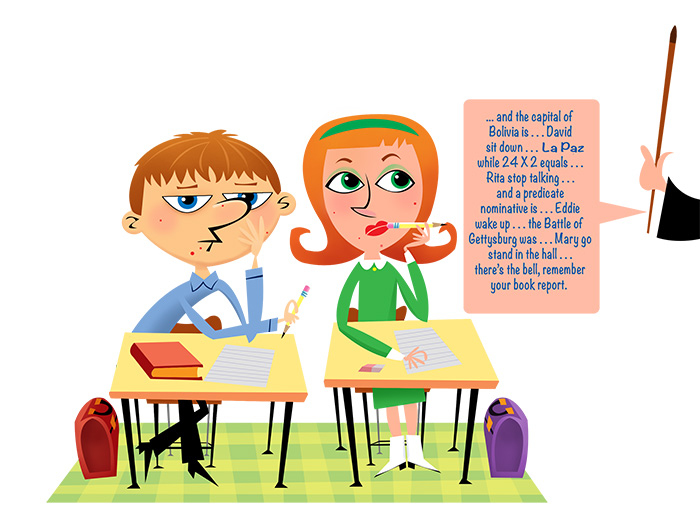 I’ve been involved with planning a grade school reunion. High school reunions are more common, but in recent years grade school reunions have gained popularity. I won’t say what year, but the illustration might get you in the neighborhood. Hint: Go-Go Boots, book bags, the girl’s hairdo, skinny pants before skinny pants were called skinny jeans. Jeans were forbidden in our grade school. As were tennis shoes, t-shirts, and boy’s hair touching the collar or eyebrows. Breaking those rules would have made for an unhappy day.

You are either a reunion fan or not. Oddly, while I was not in the inner most “in-crowd”, in either grade school or high school, I have attended all our high school reunions and am a key planner of this first-time event. By “in-crowd” I mean wildly popular, athletic, cool, best dressed, and all that. I’m being told by my fellow planning committee that I was quiet. That will come as a surprise to my adult peers who know me as somewhat verbose. Make that very verbose. Make that . . . you get the idea.

Even if I wasn’t the star athlete or head of the class, I get a kick out of reunions. I had a reputation for being an artist and being funny. That made me somewhat known, if not classically popular. I do understand people who never attend reunions and are intimidated by the idea of connecting with people from long ago. Their memories may not be pleasant.

That saddens me because I would really like for them to know we all, no matter how popular we were (or were perceived), probably felt like we were “out” a good part of the time. I’d like if the “out” people would attend and find that they weren’t as out as they thought. Age 13 isn’t the best measure of one’s life, anyway.

If you’re like me, any connection with friends from your youth likely leads to reminiscing. If this goes well, the stories will be funny and bittersweet. There might be the selective memories of better times, the desire to go back, just for a day, the sadness of missing those no longer with us. Whatever the deep psychology of all this, there is something about longing for the past combined with pessimism about the present.

This is the way with every aging generation. My mom was wired for nostalgia, as am I. For mom the  heyday of St. Louis (our hometown) was the 1940’s. Safe neighborhoods, a vibrant downtown, two baseball teams (you’re welcome Baltimore, for us giving you our former American League team), and the Admiral, a wondrous Art Deco excursion boat on the Mississippi. Mom’s enthusiasm for the 1940’s may not be shared by those who spent some of it hopping islands in the Pacific or inching through hedgerows in France. Her own brother was wounded in one of those hedgerows, so mom’s memories of the 1940’s were not all rosey.

Maybe you’ve seen the episode of Mad Men where Don Draper touts the carousel projector with an great soliloquy about nostalgia, which he roots in the Greek as meaning “the pain from an old wound”. He ends his presentation with  a poetic pitch that this slide projector was “taking us back to a place where we know we are loved”.

For all the pain and mishaps of childhood, adults often recall it as a place where they know they were loved. Or at least a place where they want to know they were loved. Nostalgia may be a very selective, even false way of finding that assurance, but the desire for assurance is deep seated. For most of us, really all of us, there are a lot of unpleasant and sad memories from childhood. Yet we want to go back, we want that pain from an old wound. We want the bittersweet memories, because within them lives a need to know we were okay and that we will be okay. That we will be safe.

I was going to write about funny stuff, the go-go boots, the Beatle haircuts, the Sisters who taught us (some were funny), the music, the candy, the old TV shows. TV dinners. My gig as a patrol boy. But somehow as I got to thinking about memory it became serious, maybe sacred.

I’m not inclined to reduce nostalgic longings to a biological trick. I’ve been told that these deep desires and emotions are only genetic codes tricking us into desiring eternity (eternal value, eternal safety, eternal life) as a mechanism for keeping us alive. That’s quite a simplistic paraphrase of the whole materialistic idea, but as I hear it, that’s what it comes down to.

Just on a scientific level, how could this be proven? The genetic code doesn’t announce itself as a trickster. I believe the code exists, but I don’t think it has a determined plan to fake us out. Isn’t it just as plausible that the code is wired into us for a substantial reason?

The writer of Ecclesiastes, no stranger to pondering the weirdness of life, wrote:

“He (God) has made everything beautiful in its time. Also he has put eternity into man’s heart, yet so that he cannot find out what God has done from the the beginning to the end.” (Ecclesiastes 3:11).

In the Gospel of St. John Jesus said that whoever comes to him he will not cast out. You are brought in. You get to the party and you get bad memory tears wiped away. You are safe, and brought to a place where you know you are loved.